At last we are let out and into the city we go!  I have never met a Roman who was not in love with their city – who did not appreciate its history along with its almost 1,000 year reign, world domination; and subsequent contribution to law, philosophy, government, military strategy, engineering, architecture, literature, painting, sculpture, religion, sanitation, town planning, heating, food, holidays and hydrology. 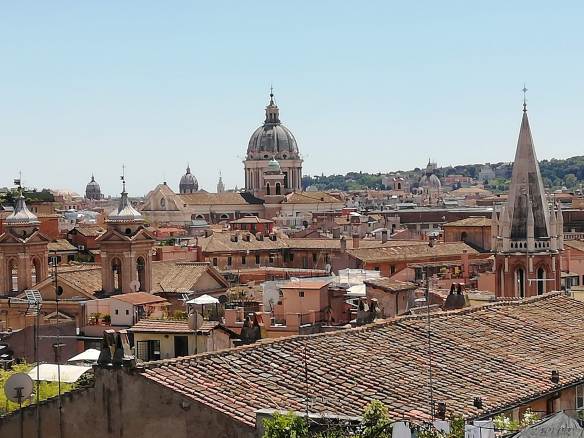 It’s the first Sunday since quarantine was lifted and after 2.5 months of eerie silence the streets and piazzas of Rome are packed.  Chock full of Romans. There is not a tourist or an English speaker in sight or earshot. I feel like I am in a time capsule that has landed me back in the early 1990’s when I first arrived in Rome. Before the invention of cheap flights and millions more tourists at all times of the year. Prior to this, Romans had always had the city to themselves from October to March, and during those months, people stared at me as though I had forgotten to go home. At that time by mid-December you could sit by yourself in the Sistine Chapel and write a novel, and by February most of the city shut down for a good long rest until Easter. In comparison, for the past decade, and before quarantine (BQ), no one has been allowed to even stand in the Sistine chapel for longer than a few minutes without being hurried along to make room for others waiting to come in.  You stood shoulder to shoulder admiring as much of the ceiling as possible while shuffling along in a sea of humanity, towards the exit. 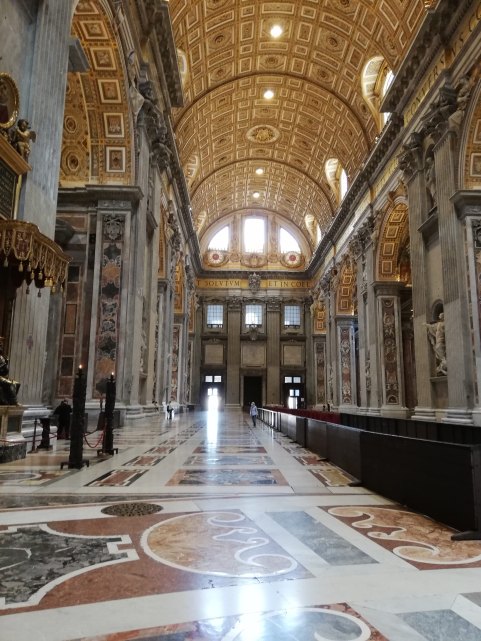 Sunday night has always been a big social night for Romans.  Far from it being the night in which to stay in and prepare for the work week ahead, it is seen as the last opportunity to milk the weekend. It’s also the time to catch up with friends after having spent the whole day with extended family. Italy has the second highest amount of elderly citizens globally therefore most people have parents or are one. So the streets and bars are packed as my husband and I saunter lazily through them.  Imagining that we would be a lot more alone than we are, I am surprised but also delighted.

It’s busy and full but not crowded and bursting.  There is space.  Space between the gatherings of people, empty medieval corridors where  chairs and tables are being set up for dinner, ivy covered spaces empty of people because it’s not yet the Roman dinning hour. A city being used by, and for, its residents alone. 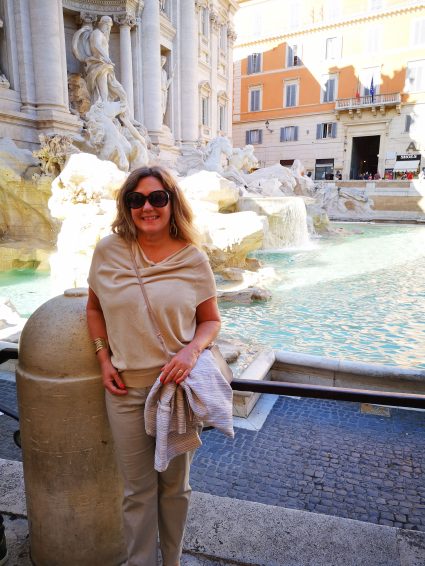 The tables in the bar next to me are filled with octogenarians drinking Aperol spritz, mostly women, and groups of couples with prams and newborns. In the piazza in front of me, instead of a keyboard and badly played Dire Straits covers, there is a vigorous game of soccer being played between six under twelves, who keep it going amidst the walkers, and use all four corners of this huge space.  Instead of flower sellers and photographers coming to our table there is a determined gang of five year olds on scooters, using the 1.5 metre quarantine space between tables as lanes, and being constantly shooed away by the waitress.  Instead of coloured plastic toys that make a noise when thrown into the air by their hopeful vendors, the shouts and screams of five girls playing hide and seek can be heard.  And as the twilight lengthens, instead of a gaggle of uncomfortable looking foreigners wearing the same T-shirt, drinking beers and self-consciously stumbling across the piazza, a serene flock of Romans cruise gracefully past on a bike tour. 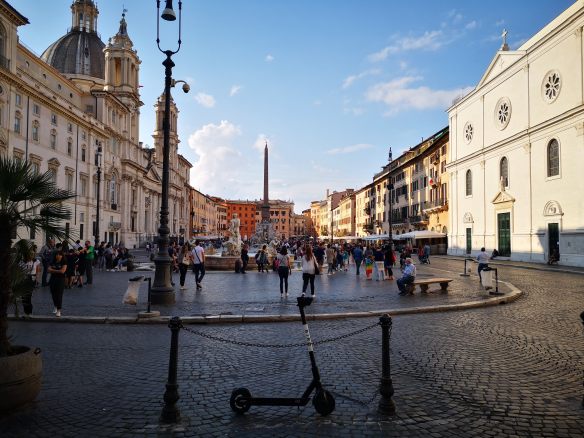 Just after sunset everyone leaves, aperitivi is finished, and it’s time to go home and eat dinner.  The piazza is quiet, empty and darkens a little just as the breeze that always occurs at sunset blows over it.  For a few minutes in the silence the piazza is bleak and windswept, reminding me of another of its original uses – a place of execution.  The imposing statue of the last person burnt at the stake on this spot, looms out of the darkness, his hooded figure menacing and joyless. But just as quickly the piazza starts to fill up again as families who have decided to come out for dinner do so; like the appointed hour for aperitivo, dinner is similarly scheduled. Freshly washed children prance around with their parents as groups of friends meet and sit down to dine. 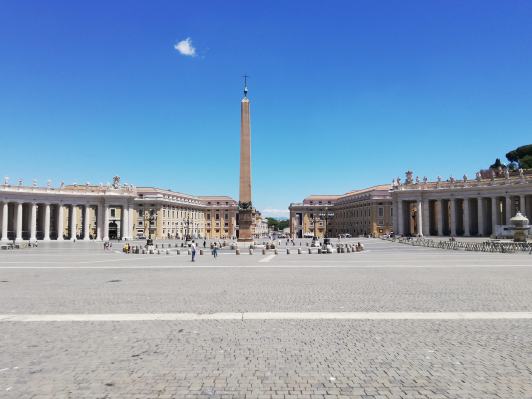 My husband and I have been coming to this restaurant for twenty five years – many of our early dates were here.  It’s been two decades since I have seen groups of Roman families here.  It’s mostly couples and always tourists.  The proprietor’s Nonna still makes the fettucine daily, sometimes just inside the front door if you come for lunch.  They bake their own bread and he is the fourth generation that has run the restaurant.  We are his first customers after quarantine and if we could, we would hug vigorously.  Instead we talk loudly and at length about all that has passed in the last few months.

‘The day after we had to shut down, I came to the piazza anyway’, he says. ‘I had come here every day for the past thirty years to work, it just seemed natural.  When I saw the piazza empty and everything shut, I felt my heart break, it was too difficult and I stayed away after that.’

After such a long time I expected things to be a bit rusty, but it was as though 2.5 months of pent up longing went into my meal.  The antipasto of burrata cheese with char-grilled slices of zucchini and eggplant put me in my happy place for more than 24 hours.  The lamb was juicy and tender, the wine cool and fruity, and the roast potatoes sprinkled with sheep’s cheese and pepper, induced an eating episode that was more like an inhalation of all that I had missed and loved about this place.  I sailed home as the last twilight faded, wishing that everyone in the world could come here and have this – just a few people at a time though. 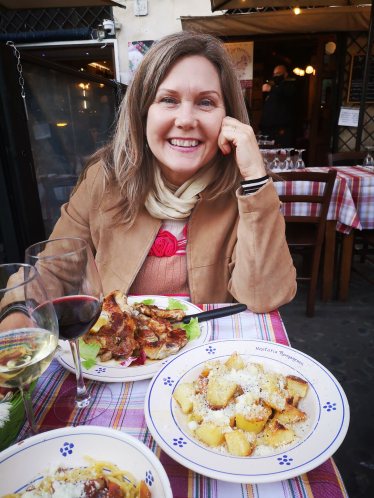 If you liked this story read more in my book Roman Daze – La dolce vita for all seasons at https://brontejackson.com/prosecco-fixes-everything-stories-of-life-in-rome/

And soon to be published……..Ticket for One. One woman’s transformative, inspirational and humorous trek through Greece, Turkey and Italy.

Sometimes you have to let go of everything to find what you really want.