A beautiful and insightful review from the Editor of ‘Insights.  Melbourne Business and Economics.’ by Associate Professor Geoff Burrows.  A regular and passionate visitor to Rome.

REVIEW of ROMAN DAZE – LA DOLCE VITA FOR ALL SEASONS

The saying that ‘every immigrant is an anthropologist’ is colourfully realised in Bronte Jackson’s Roman Daze.   Arriving in Rome as a backpacker courtesy of a free airline ticket won in a raffle and after a failed marriage, she immediately fell in love with the city during what turned out to be a 17-year stay, acquiring along the way fluency in the language, an Italian husband and employment with the UN’s Rome-based World Food Program.

Loosely structured around how the four seasons impact on Rome and its inhabitants, the text offers a series of fascinating excursions into Rome’s geography, history and the living, working, courting, shopping, eating, beach-going, and other socialising and recreational habits of its citizens.  Some clichés are shown to be true – timetables are largely works of fiction, Italian women do apply make-up before exercising, bank tellers do demand the personal phone number of young female customers as a condition of providing service.  At least one legend is also verified: the existence of a keyhole, remote from the Vatican, which offers a breathtaking view of the Holy See.

There is no air-brushing of Rome’s frustrations: long waits and customer-unfriendly banking procedures and the lack of a service ethos in Italy’s bloated public sector.   However, there is always the compensation of superb food and coffee, the search for which is a sub-theme running through the text.  Frustratingly for tourists, the best food and coffee is served in small obscure establishments, mostly invisible to foreigners.  The locals never patronise establishments directed at tourists.  The subtleties of local variations are constantly described.  Unexpectedly, Italians emphasise the taste of pasta itself rather the toppings.  The author also describes her own culinary triumph – a quiche at a neighbour’s crowded sixtieth birthday party.

Much travel writing is by experienced journalists based on quick impressions on sponsored trips.  Roman Daze is the account of a 17-year love affair with a city.  Written in a deceptively easy prose style, it is recommended to both first-time and regular visitors to the Eternal City. 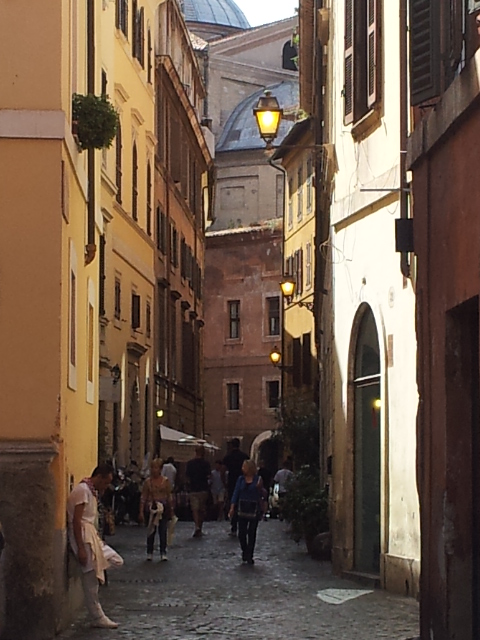