The rest of the list is a bit later than expected.  We have been through some trying times recently which I will blog about next.  In the meantime here is the rest of the list!   Although I did say they would be in order, upon reflection I can’t order them as they are all so different and depend on what kind of dinning experience you are seeking.  The caveats from the last blog still apply though.

A beautiful, succulent and rich experience of a typical, contemporary restaurant, that has nevertheless been around for half a century or more.   It is based in the most traditional part of Rome, Trastevere, a mostly pedestrian only precinct, which is now packed with restaurants and is an enchanting neighborhood to eat in.  Ai Spaghettari is always noisy, has the television blaring, and is always full.  A pizza oven greets you at the door and you can watch while your pizza is made, being flung up in the air and all. There are vast amounts of seating outside and in, and service and menu are both good, featuring lots of traditional Roman specials.  If you don’t book you may be waiting a while but you will get a seat eventually.

I avoided going to this restaurant for years as it looks like the typical tourist trap often found in Trastevere.  Red checkered table cloths, tables set outside in front of a beautiful, white marble church, and filled with tourists.  Then my Italian husband and his mates took me there.  Now we know the waiters by name.  Frequented by both Italians and tourists alike, its cheap and cheerful outdoor atmosphere make it a superb summer Roman dinning experience (and indoors for Winter).  They have a large and traditional menu (including pizza) and the food always tastes surprisingly good for its quick production, volumes turned-over, and large variety.  Their Tiramisu is one of the main  reasons we keep going back.  By the way, once I asked the waiter what the significance of the name was.  He told me its the sound that Italian men make when they squeeze the breast of a woman “popi, popi”.   Booking is optional, just turn up and the waiters will look after you. 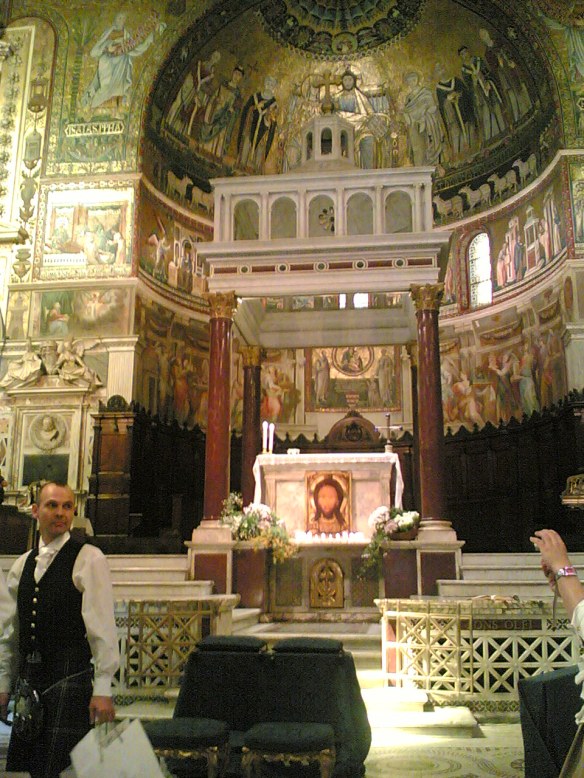 Carnivores unite! The window is packed with hanging dead animals of the kind not often seen – boar, pheasant, deer and hare.  If you need an iron or blood fix this is the place to come.  Deep rich, red salamis of wild boar, pastas with venison ragu, stews of hare, Fred Flintstone steaks of beef, pork and veal are all on the menu here and nothing much else.  If meat is what you are after you will get any kind your heart desires (including heart…..).  It feels like you are eating in a Tuscan agroturismo with bare brick walls, lively noise and Chianti bottles everywhere.  The huge open grill is at the front and you can go and choose your type and cut of meat before cooking.  Best to book as it tends to be a restaurant that people go to specifically for this kind of food.

This is the Frat Boy version of these top ten restaurants in that it has foregone all the add-ons of Italian cuisine and just focuses on the pasta.  Exactly 100 different pasta dishes can be ordered here and not much else.  But why would you bother coming here for anything else, their pasta dishes are fantastic?  Originally another restaurant I stayed away from as it seemed too gimicky to be good food to me, but I was dragged again along by my husband and his mates who had all eaten here for years.  Once I tasted my Fiume di Londra (London Fog) pasta dish I understood that no short cuts had been taken in delivering high quality, mouth watering food by focussing on just one type of dish.  This is a great place to go when you are sick of the same menus in all the other more traditional restaurants of Rome, although here you can get the traditional plates as well of course.  Try also the Pasta al Limone and the Penne alla Vodka a traditional dish that many restaurants disdain to put on their menus but is delicious and won’t make you drunk (although perhaps best not served to children).  Their vegetable dishes and Tiramisu are pretty good too.  Seating is outside partly and right on the cobblestoned street so cars will pass at your elbow.  Inside there is plenty available although it is a bit warren like, underground and airless at times.  If you book try to sit outside or ask for a table close to the entrance.  This restaurant is literally around the corner from the Trevi fountain. 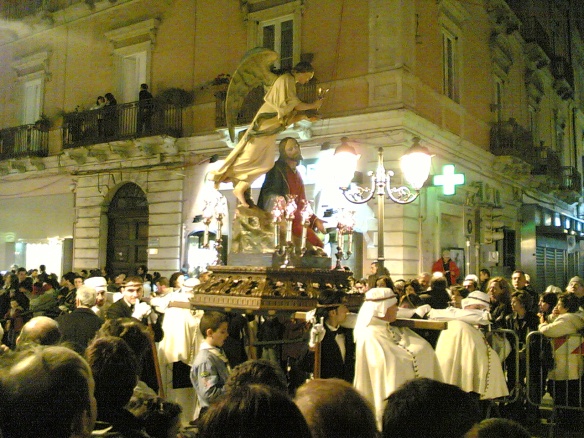 This is a gorgeous, out of the way, nourishing and cosy restaurant.  It is situated off the main shopping strip of Via Nazionale, close to Termini and right at the end of a dead end street.  It serves most things but I come here for the pizza which is slightly different from the pizza you will get in most of Rome.  Instead of the delicious light, thin-crust pizza that is typically Roman, these guys follow the Neapolitan tradition of thick crusted, doughy pizza bases.  Most Roman pizzas, like their pasta dishes, have two, maybe three toppings on them.  Don’t be tempted to do more, especially not in this restaurant, as you will be unable to finish it.  Toppings  are designed to enhance the pizza base not drown it out, similar to the toppings for pasta.  For example the best pizza is usually the Margarita (named after their last Queen) which consists of tomato paste, mozzarella cheese and basil (the three colors of the Italian flag) .  The wood panelled walls and old-world decor make it a relaxing and casual dinning experience, inexpensive and a nice place to eat as a couple or in a small group.  The menu is not large but has most traditional Roman food on it.  It is small, quieter than the other restaurants and has high quality food.